Skip to Main Content
It looks like you're using Internet Explorer 11 or older. This website works best with modern browsers such as the latest versions of Chrome, Firefox, Safari, and Edge. If you continue with this browser, you may see unexpected results.

The Harp: History of the Harp

The harp occupies a position unique in the history of music. It is the oldest known instrument, having existed in one form or another, in every land and every age. 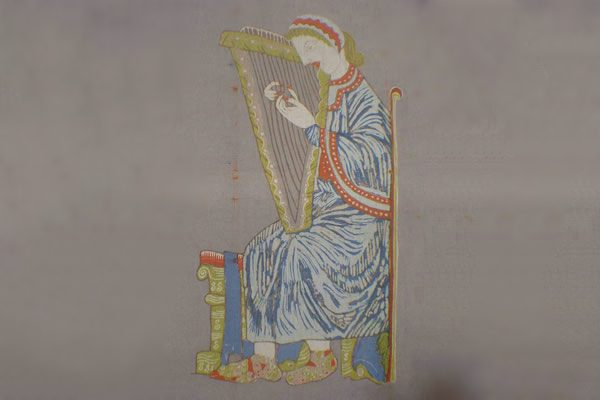 The harp is one of the oldest musical instruments in the world. The earliest harps were developed from the hunting bow. The wall paintings of ancient Egyptian tombs dating from as early as 3000 B.C. show an instrument that closely resembles the hunter's bow, without the pillar that we find in modern harps.

The angled harp came to Egypt from Asia in about 1500 B.C. It was built from a hollow sound-box joined to a straight string-arm at an angle. The strings, possibly made of hair or plant fibre, were attached to the sound-box at one end and tied to the string-arm at the other. The strings were tuned by rotating the knots that held them.

During the Middle Ages the pillar was added to support the tension of extra strings. Stiffer string materials like copper and brass were used and these changes enabled the instrument to produce greater volume and a longer-sustaining tone. Paintings of these harps appear in many early manuscripts and their shapes hardly differ from those of the Celtic harps that are still played today.

As the early harps had no mechanical devices for providing the player with different keys, harpists found it necessary to retune those strings they required for each piece. Eventually, in the latter half of the seventeenth century a row of metal hooks was placed along the left side of the harp. When the player manually turned a hook against an individual string, the string's pitch was raised a half step. Modern non-pedal harps are built with greatly advanced sharping levers installed for each string which produce a very good tonal quality when engaged. Levers are generally moved with the left hand and skilled players can achieve changes very quickly.

The earliest known depiction of a frame harp in the British Isles is on an eighth century stone cross. Music was an important part of life in ancient Ireland and the harp was an aristocratic instrument, played in the courts of kings and before the chiefs of clans. Harpers were required to be able to evoke three different emotions in their audience by their music: Laughter, tears and sleep. With the Anglicisation of the Irish nobility, the traditional harpers became minstrels and street musicians reciting poetry and singing folk songs to the accompaniment of their harps.

Sometime before 1720 a mechanism was developed in order to meet the growing demands from harpists for an instrument that was capable of a broader range of pitch. Seven pedals built into the base of the harp could raise the pitch by half a step. For instance, if the harp were tuned to C-flat, then depressing the pedal would raise the C strings to C-natural. The single action harp was born.

The pedals were connected to metal rods, which passed through the forepillar to the top where the chromatic action was housed inside the curved neck. The action pulled the string onto a fret by means of an adjustable crochet, or hook mechanism which, when engaged, shortened the length of the string and raised the pitch one half step. When tuned in the key of E-flat, the instrument could be played in eight major keys and five minor keys.

The single action harp achieved great popularity throughout the rest of the 18th century as was evidenced in the French Court by Marie Antoinette; perhaps, the most famous player of this instrument. The harps of this period were magnificently decorated with relief carving, lavishly gilded and hand painted. Besides being musical instruments they were undoubtedly prized as object d'art when displayed in the gilded salons of the era.

As music evolved it was also necessary for the harp, if it was to maintain its popularity, to move with the times. Instead of only being limited to eight major keys and five minor keys, it had become vitally important for the harp to be able to played in all keys. As a result of this need, Sebastian Erard obtained a patent in 1810 for the Double Action pedal harp.

Erard redesigned the single action mechanism, replacing the crochets with two rotating pronged discs. The strings, now each equipped with two discs, were able to produce a flat, natural and a sharp depending on the position of the corresponding pedal, allowing the harpist to play in every key.

This ingenious invention revolutionized the harp and is still in use today. The harp has since continued to evolve and has had many significant improvements made to it over the past two centuries. In the late 1800's Lyon and Healy, a Chicago based company which is still building harps today, began building harps in America with greatly strengthened frames and many important improvements to Erard's double action mechanism.

Due to the continued popularity of the harp into the 20th century, many other harp makers arrived on the scene each bringing their own improvements and inventions without which the instrument would not have been able to maintain its foothold in modern society. In America, besides Lyon and Healy, some other pedal harp makers include Wurlitzer, Venus and Swanson. Some additional makers in Europe include Salvi, Camac, Horngacher, David and Thurau as well as Aoyama in Japan.

The 21st century holds great promise for continued popularity of the harp as is evidenced by the myriad festivals, conventions, societies, harp builders, music, performances and career opportunities available to harpists.

From Medieval to Modern, from Classical to Jazz, from Acoustic to Electric. The harp is an instrument steeped in tradition yet open to change and for many it is more than a mere instrument, it is a calling.

Classical Classrooms: Harping on the Harp

The Druid's Harp of Ireland